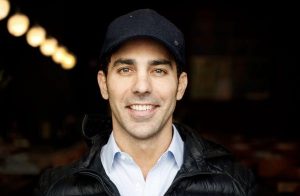 In 2000, Blatty took a position as general manager and promoter of Club Ampersand, one of the city’s newest nightclubs. The following year, he accepted full ownership and responsibility for the club, and under his leadership it became the most popular dance music venue in New Orleans, hosting performers such as Tiesto, Paul Van Dyk, Kaskade, Lil Wayne, Eric Morillo, Carl Cox, and Skrillex. Hurricane Katrina destroyed Ampersand, but Blatty rebuilt it and ran its operations until 2010. In 2010 Blatty took on a new partner and ceded operational control to Robert Brunet in order to focus on expanding his Barcadia brand and properties. Blatty remained proprieter until Ampersand closed in April 2014, with DJ Tiesto playing the closing event.

During his venture in Club Ampersand, he also founded New Orleans’ Ohm Lounge and Barcadia Bars. For Ohm Lounge, he drew inspiration from Asian sake, small plates, and artisanal cocktail lounges. He guided the project from initial phases like menu creation and interior design on through to its current position as an award-winning food service establishment. He founded the first Barcadia Bar in Dallas, Texas, in 2007. He designed the entire concept including the restaurant, beer garden, and retro arcade to provide a 1950s feel. Later, Billy established a Barcadia Bar in New Orleans, Fort Worth, and Baton Rouge. He supports each location as market director and brand manager.

A businessman active in his broader community, Billy has raised money for such nonprofits as the Louisiana Restaurant Association Education Foundation and the National Organization for Rare Disorders. When not working, he participates in car rally competitions. In 2013 and 2014, he won the Bullrun Rally and placed second in the same event in 2012. For entertainment, he enjoys reading classic literature like The Brothers Karamazov by Fyodor Dostoyevsky and The Count of Monte Cristo by Alexander Dumas and Auguste Maquet. Billy travels throughout the world, having visited each continent with the exception of Antarctica. An enthusiast of athletics, he plays in tennis tournaments. His love for the sport was instilled in him by his mother, winner of the Italian Open.